There is a reason why we are the best source for navy challenge coins! 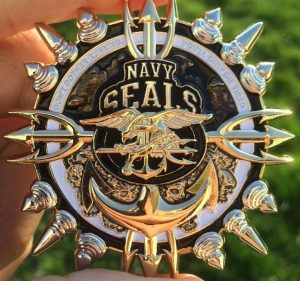 Navy SEALs live by the motto “Ready to Lead, Ready to Follow, Never Quit!” They are some of the few people in the world who can handle the intense physical training and mental stress that make the world’s best fighting force. SEALs are the Navy’s special forces on land, in the air, and at sea. Every day is spent training and conditioning the body and getting ready for special operations that take place all over the world.

SEAL operators are sent to deserts, rainforests, forests, and icy locations, and they have to be ready to stay alive and do their jobs well. Nature’s worst weather can’t stop them, and no one can stop them from getting where they want to go. Navy SEAL challenge coins show respect for the strength, skill, and accuracy of each SEAL team. SEALs are proud to carry their coins. They show how SEAL operators are made up of years of hardship, anguish, and training. Navy SEAL challenge coins are never given out, they must be earned.

We make it easy to make your own challenge coins.

But we’d rather have other customers tell you about it.

We make custom Navy challenge coins with designs that include team logos, mottos, and names. They are given to soldiers, sailors, and civilians who have done important work, shown courage in the line of fire, or helped the team reach its goals. By making people feel like they have had the same experiences and have the same goals, Navy challenge coins become small pieces of the unit’s history.

Follow one of the links below to start making your own Navy SEAL challenge coins right away. All of our clients get free artwork, and once an order form is sent in, your first free proof will be ready in 24 to 48 hours.

Making the best fighting force in the world

For SEAL training, only the most physically fit people are even considered. The Naval Special Warfare Command suggests that people who want to join BUD/S (Basic Underwater Demolition/SEAL) train for 26 weeks. At BUD/S, the preparation and training routines focus on making the body as strong and durable as possible. Every day, people run, swim, and work out their upper bodies, cores, and lower bodies.

The first phase of BUD/S is the hardest. The three phases of BUD/S are the hardest and most difficult conditioning of any service branch in the United States Military. Navy SEAL challenge coins are given to trainees who make it through each phase of training. Custom designs take into account the problems and lessons learned from:

Phase 1: Eight weeks of getting in shape

People say that phase one of SEAL training is the hardest because of the third week, which is called “Hell Week.” Recruits go through 5 12 days of cold, wet operational training without getting more than 4 hours of sleep the whole time. Physical and mental strength, ability to handle pain and cold, attitude, and working as a team are all tested. Trainees are tested on how well they can do their jobs even when they are very tired, under a lot of physical stress, or under a lot of mental stress.

Only 25% of SEAL applicants make it through training and go on to become SEALs. Most people say that it was the best thing they’ve ever done in their lives. It shows the next generation of SEALs that their bodies and minds can do twenty times more than they thought. When they go into battle, SEALs think back to Hell Week and know that there is nothing they can’t do.