US Navy Challenge Coins – A Thing Of Pride And Beauty

The United States Navy has the strongest array of ships, aicrafts, and submarines than any other navy in the world. Their mission entails recruiting and training the best sailors to ensure that they are combat ready to win any conflict while also maintaining the security of the US and its allies, as well as simultaneously providing deterrence. The motto of the US Navy is “forged by the sea”. This is because the sea has a way of teaching a man about life, that it is not easy, and of course just like life, the sea can be calm one minute, and restless and chaotic the next. Sailors value acts of honor, courage and sacrifice. We love the US Navy because we get to make the coolest looking Navy command coins around. The US Navy is our biggest customer, and we are fortunate to have made thousands of department of navy challenge coins. An aircraft carrier such as the USS George W Bush can have as many as 2000 to 5000 people on board! Imagine getting Navy ship coins for all the sailors on board. That is a lot of custom challenge coins indeed! A few years ago in 2014, we made custom navy challenge coins for some of the teams that work with the aircraft on the carrier. Those teams have different colors, which represent their different duties, such as maintenance, handlers, fuel, ordnance, officers, and medical personnel.

As the general public well knows, the Navy Seals are a force to be reckoned with, and many special forces groups look up to the seals, because it is not easy to become one as they have to go through very difficult physical and mental training to pass the BUDS course. Navy Seals are the top of the top, and are trained to operate in land, sea and air, and will win, no matter the cost. We are honored to make navy command coins for the Navy Seals, whenever they put in an inquiry with us. Seals are the most relaxed and humble people to speak to (and to have as a customer!). They understand sacrifice, honor, and commitment and they live it in their daily lives. Department of navy challenge coins depend on which ship, submarine or crew is ordering them, but one thing remains the same, which is the US Navy logo, with the eagle with the anchor. If you want to see examples of navy ship coins we have made in the past, or even the submarine challenge coins, you can check out our facebook or instagram for examples. But please go ahead and contact us today for your free price quote! 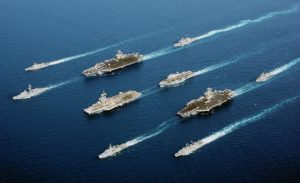