We enjoy making Navy ship coins, as  well as Army coins of excellence. Why? Because each coin has meaning and tells a story, unique to each division/unit. There are so many areas of specialty, and that means that commanders are likely to buy custom challenge coins for their men/women! Military challenge coins are handed out when a successful training operation is completed, such as Operation Enduring Freedom, or Operation Resolute Support. These operations are held on a massive scale, and are usually coordinated with other branches as well as armies from allied countries such as NATO. We recently did a challenge coin that was handed out as an army coin of excellence to all soldiers who participated in a special coordinated exercise in Europe.

A commanding officer usually gets coins for their men as a way to build morale and solidify the memory of the operation in history. So when the soldier looks back at the particular challenge coin, it reminds him of his accomplishment. The history of the challenge coin may go back to the first world war, and it quickly became famous in the US Army, before spreading to other branches of service. We have even done FBI challenge coins and CIA challenge coins. As elite as both those organizations are, they still order coins for their agents, but also for office staff and the people they work with (such as special forces). Next time you run ino a service member, ask them about their collection of challenge coins. The chances are that they have so many from their career, especially if they are in the US Army! US Army challenge coins are a source of pride for current service members as well as veterans. The VA (veteran’s benefits association) gets many challenge coins made to hand out to veterans, and they realize that by doing so it will remind the veteran of their days of service. So many VA hospitals participate in this program. We know this because we have worked on many coin projects where different locations have participated and have gotten some beautiful designs made. If you get in touch with us today, we can email you a no obligation price quote and you can see how you can get some custom coins cheap. 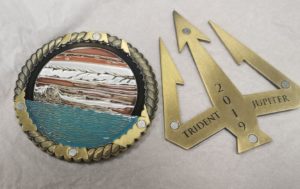 We Are The Top Challenge Coin Maker