We produce a lot of custom challenge coins for the marine corps. The designs are so unique and sometimes they incorporate navy themes as well. After all, the Marine Corps was a part of the Navy. Marine challenge coins hold a significant place in the line of work that a Marine has to do. Since they are a proud bunch, also known as the “the proud, the few”. We have done a lot of marine corps challenge coins especially for recruiting substations, which is a fancy term for a recruitment office. Marines always know what they want, and we always end up making an amazing design from start to finish. The Marine Corps really does live by their motto “Semper Fidelis” (always faithful). Because they stay true to who they are, and to their country. They live by a certain philosophy that others don’t live by. They are the elite fighting force of the US military. The Marines are always the first to go in and the last to leave. They don’t fight to lose. They fight to conquer and to be victorious. When met with resistance or adversity, it is only meant to be a challenge to be overtaken.

To serve as a Marine means to be selfless and to serve with pride, that is why we are so happy to work with the USMC to create marine corps challenge coins. Before a Marine challenge coin can be created, artwork must be created. Usually, we go off of a drawing someone has made, or maybe they have an existing artwork file. We accept all major file types, so it has never been easier to have Marine corps coins created. We take pride in making custom challenge coins for America’s top fighting force. Commitment, courage, and honor are some of the values that a Marine believes in. Also having the latest weaponry and staying ahead of the curve is what allows them to dominate the enemy. They train in peace to be prepared at any given moment for war. When the Marine Corps does training exercises and operations, they tend to get Marine corps coins, and this is what excites us most, because the designs are always intricate, beautiful, and reflect the spirit of the corps. 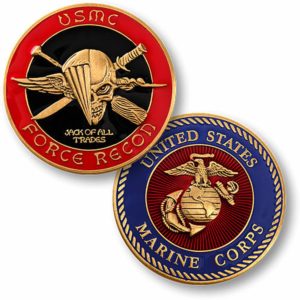