The US Air Force has always led the way in terms of having the best air power in the entire world. From doing air strikes to transporting troops, they can get it done. The Air Force is a force to be reckoned with. They dominate in air, cyberspace, as well as space. This is the newest branch, as during World War II they were known as the Army Air Corps. The core values of this branch entail service before self (selflessness), excellence in everything, honor, and valor. We are happy to make US Air Force Challenge Coins for our airmen, as each challenge coin has an amazing aviation design. The latest design that we can think of us one we created in the shape of a KC-130 aircraft. It was silver, with 3D plating. Air force challenge coins end up looking very cool not only because of the aviation theme, but the ranking structure is unique as well, as their ranks cannot be mistaken with any other branch of service.

They also have the Air Force pararescue (also known as the red berets) and TACs.. These brave men are the special forces of the US Air Force and they work alongside the Navy Seals and Army Rangers. The job of a para rescue special airman is to go behind enemy lines to rescue men who are wounded. They are trained to perform surgical techniques on the battlefield. Their job also is to do reconnaissance and to setup communications and air strips in the most desolate parts of the world. They stand ready to fight, win and prevail. And yes, we have also done US Air Force challenge coins for red berets. Everything from a coin shaped like a skull and crossbones to a custom challenge coin that has the shape of the actual Air Force logo. In all our coin designs we only use the highest quality materials such as brass, and we offer free shipping on every order. Did you also know that a percentage of each order is donated to charity? We make a difference while doing our work! If you are an airman reading this article, go ahead and get in contact with us today, you won’t regret it! We will give you a no obligation price quote and send you some amazing artwork. Just like the Air Force, we too at Challenge Coins 4 U pride ourselves on excellence in everything we do, from customer service to the design process. 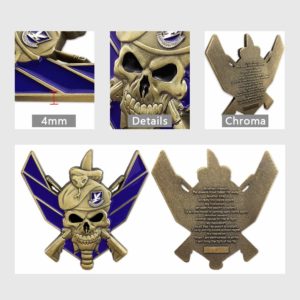